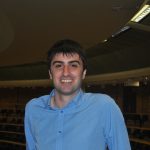 Matías Dodel is a Sociologist (PhD, M.A. & B.A.) and Psychologist (B.A.) who specializes in Information Society, Public Policy and Poverty/Inequality issues. Head of Research at Universidad Católica del Uruguay (UCU),  he is also a researcher and a teacher at the Departments of Social and Political Sciences (DCSP) and Communications, where he was appointed as the director of the Research Group on Uruguay, Society & Internet (GIUSI). Since 2015 he has been coordinating Uruguayan’s World Internet Project, DiSTO (From Digital Skills to Tangible Outcomes), and Kids Online strands. Simultaneously, since 2009 he has worked as an expert Sociologist at the National E-government and Information Society Agency (AGESIC) of the Uruguayan government Presidency, were he developed the official households ICT surveys (EUTIC: 2010, 2013 & 2016) in collaboration with the National Statistical Office. He recenly completed his PhD at University of Haifa on the topic of digital inequalities and cyber-safety.