The Regional Center for Studies on the Development of the Information Society (Cetic.br) launched the results of the sixth ICT Kids Online Brazil survey. The results show that more children are now online (85% of children aged 9 to 17 years), they mostly use a mobile phone to access the internet (93%), and receive more parental guidance on safe internet use. The new survey explores for the first time children’s civic participation discovering that over 1 in 10 children use the internet to discuss politics and problems in their city or country.

Children mostly use their mobile phone to go online

The new ICT Kids Online Brazil 2017 survey estimates that approximately eight out of ten children (85%) aged 9 to 17 years are internet users, which corresponds to 24.7 million users across the country. In 2016 this proportion was 82%. The results also point to the persistence of regional and socio-economic disparities in internet access and use: between urban areas (90%) and rural areas (63%), the Southeast (93%) and North (68%) of the country and socio-economic status (AB, 98% and DE, 70%).

The survey shows an increase in the use of mobile phones among children to access the internet over the past years. In 2012, 21% of children went online via a mobile phone, while in 2017-18 this percentage is 93% – an equivalent to 23 million children. At the same time, there is a 37% decrease in the use of other devices – like desktop computers, laptops, and tablets – to access the internet, from 90% of children in 2013 to 53% now.

The survey also estimates that 44% of child internet users go online exclusively via a mobile phone, which represents 11 million young individuals. Mobile phones are the main device for internet access for children in rural areas (57%), in the North of the country (59%) and from lower socio-economic backgrounds (DE, 67%). 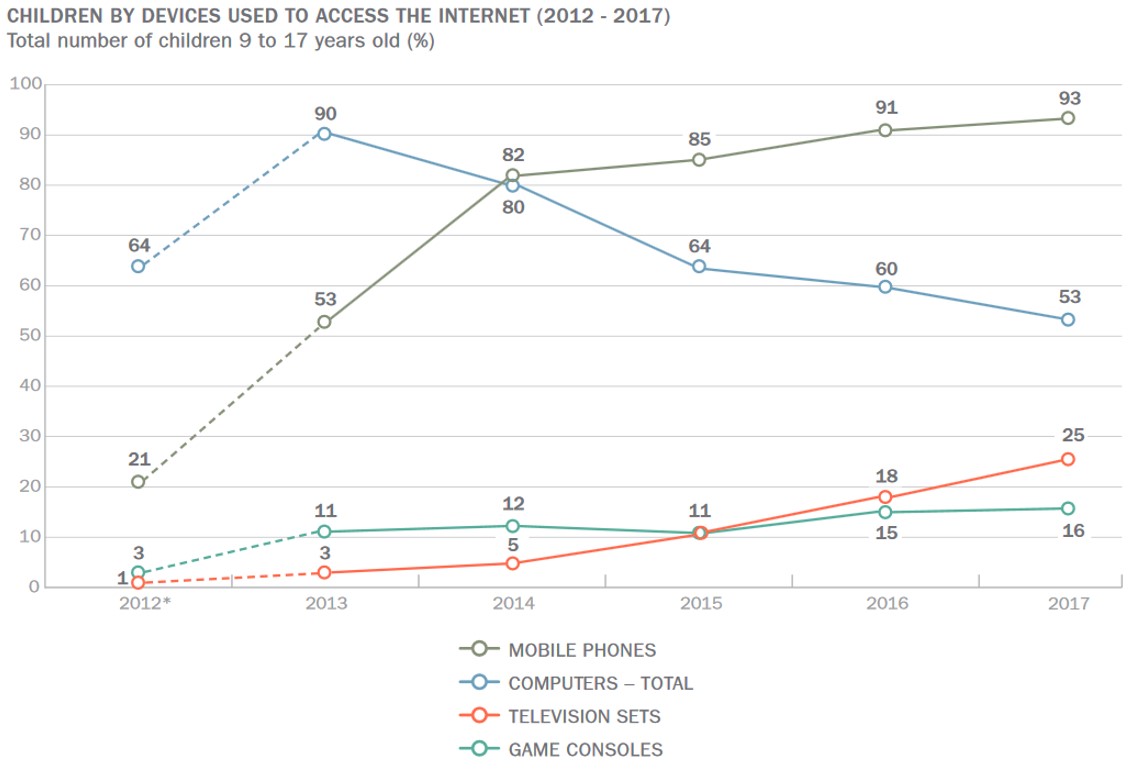 The new ICT Kids Online Brazil survey shows a notable growth in the online news consumption of Brazilian children aged 9 to 17 years: 51% of the internet-using children now read or watch the news online compared to 2013 when this proportion was only 34%.

In relation to children’s online activities, using the internet for communication and entertainment is still predominant among children: sending instant messages (79%), watching videos online (77%), listening to music online (75%) and using social networking websites (73%) are amongst the most popular activities. According to the survey, another common activity is looking up information on the internet, whether for schoolwork (76%) or personal interests (64%).

For the first time, the ICT Kids Online survey explores children’s civic participation and shows that 40% of children use the internet to talk to people from other cities, countries or cultures and 36% contribute to web discussions or online groups related to things they like, 28% look up health information on the internet and 22% look for news about what is happening in their community. Furthermore, 12% of children use the internet to discuss politics and problems in their city or country and 4% participate in online campaigns or protests.

The new ICT Kids Online Brazil survey shows that 39% of users aged 9 to 17 years – which corresponds to 9.7 million children – report having witnessed some type of discrimination on the internet during the past year, a result that remains stable in comparison to 2015 and 2016 (within the margins of error of the survey). Discriminatory content on the internet is mentioned more by girls (46%) than boys (32%) and more by the older children (54% of the 15-17-year-olds compared to 13% of the 9-10-year-olds). The main types of discrimination reported are related to colour or race (26%), physical appearance (16%) and same-sex attraction (14%).

The survey also found that internet users aged 11 to 17 years are exposed to content involving changing their physical appearance, such as information about ways of getting thin (19%). Girls report accessing this content at a higher proportion (25%) than boys (12%). 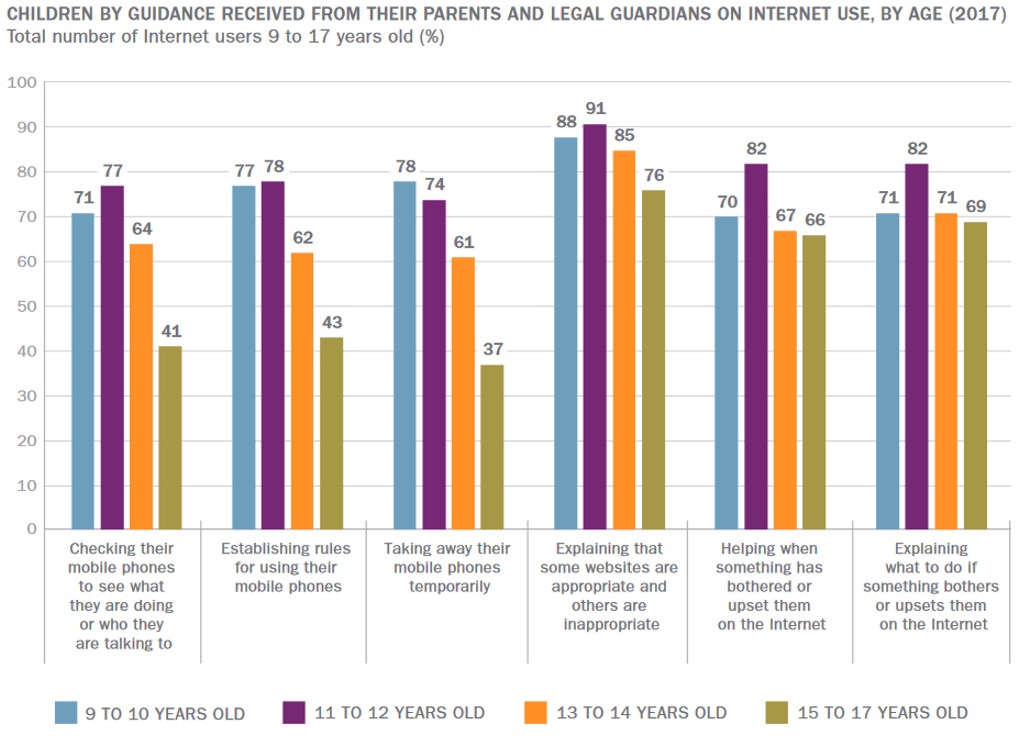 More parents talk to children about being safe online

In relation to safe internet use, seven out of ten children online use the internet safely, according to their parents or guardians – a stable proportion in relation to the previous years of the survey. The perception of online safety is greater among parents and guardians with higher levels of education (75% among those with higher education) and socio-economic status (AB, 72%).

“The experience of parents and guardians on the internet can be relevant to understanding the perception of online safety and risks. It is essential that public policies encourage this debate among adults so that they are better prepared to address the topic with youths,” emphasises Alexandre Barbosa, Head of Cetic.br.

For its sixth edition, the ICT Kids Online Brazil survey interviewed 3,102 children aged 9 to 17 years, as well as their parent or legal guardian throughout the country. Interviews were conducted between November 2017 and May 2018, with the objective of understanding how this population uses the internet and how they deal with online risks and opportunities. The methodology of the survey is aligned with the conceptual framework developed by the Global Kids Online and EU Kids Online networks, enabling the production of comparative studies on children’s internet use.

More about the previous surveys

Regional Center for Studies on the Development of the Information Society (Cetic.br)

The Regional Center for Studies on the Development of the Information Society, a department of Brazilian Network Information Center (CGI.br), is responsible for producing indicators and statistics on the availability and use of the internet in Brazil and publishes regular analyses and information about the development of the internet in the country. Cetic.br is a regional centre for studies under the auspices of UNESCO.

The Brazilian Network Information Center (NIC.br) is a nonprofit civil society organisation that implements the decisions and projects developed by the Brazilian Internet Steering Committee (CGI.br). Its ongoing activities consist of coordinating the registration of domain names through Registro.br, studying, responding to and resolving security incidents in Brazil through Cert.br, studying and researching network and operational technologies through Ceptro.br, and hosting the W3C Brazil Office.

The Brazilian Internet Steering Committee (CGI.br) is responsible for establishing strategic directives related to the use and development of the Internet in Brazil, and coordinates and integrates all of the internet service initiatives in the country, promoting technical quality, innovation and dissemination of the services provided. Based on the principles of multilateralism, transparency and democracy, CGI.br represents a multi-stakeholder internet governance model that includes the effective participation of all sectors of society in its decisions. One of its products is the 10 Principles for Internet Governance and Use.